Brisbane is the perfect gateway to begin your exploration of sunny Queensland. With 13 regions ready for exploring, each one is packed with epic experiences for every taste of adventure. Follow the road inland and admire the rainforests and waterfalls, head to the outback to admire the red sands and sparse scenery, or cruise along the coast towards the iconic Whitsundays and Great Barrier Reef.

Travelling through Queensland in a Mighty camper will allow you to explore new things in a free-spirited way. Mighty makes holidays possible for everyone, no matter their budget. From the basics done brilliantly, and the total package at a tight price, hire a camper to hit the road and discover Queensland.

Vehicles must be collected/returned at least one hour before closing time.

The Brisbane branch is best accessed by Uber or Taxi. Transfers are not available from the airport/city to the branch. Parking is available at Andrews Airport Parking, located 4.5km from our current branch (9km from our new location). A drop-off and pick-up service to the branch is available for Mighty customers (allow 15-20 minutes) and must be organised directly with Andrews Airport Parking on (07) 3268 4222.

Vehicles must be collected/returned at least one hour before closing time.

Whether this is the first time you've taken a campervan journey or you're a regular to hiring motorhomes, our expert team will be on hand to answer any questions you have before heading out on the road.

You can purchase our Express Return Pack – which means at the end of your hire, you don’t need to fill up the gas bottle or fuel tank (not available from 1st April 2023). And if you’ve also purchased the Liability Reduction Option or Inclusive Pack, take advantage of our express key return service and just drop the keys off at the dedicated desk and set off on your way.

Where pick-up originates or returns to Brisbane from another branch location, a one-way fee of AU$165 will apply. From 1st April 2023, the one-way fee is AU$185.

A $100 AUD surcharge will apply to all campervan rentals picking up and/or dropping off in Brisbane on;

Refer to the Rental Agreement for exact dates.

To help you prepare for pick-up, make sure you have:

The Mighty Branch is equipped with everything you need to ensure an easy start and end to your trip. 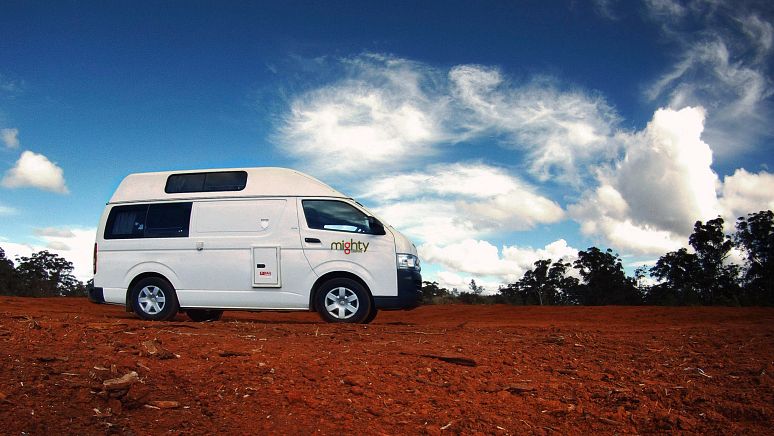 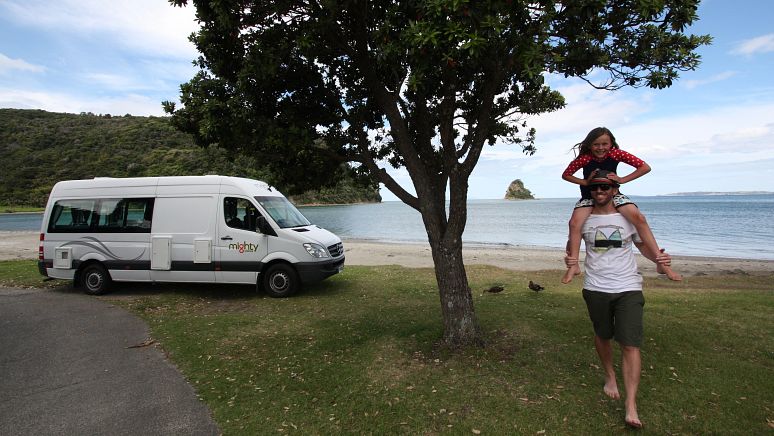 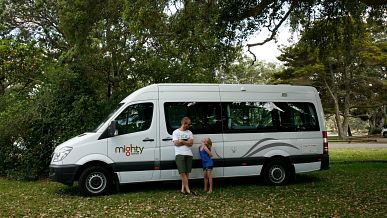 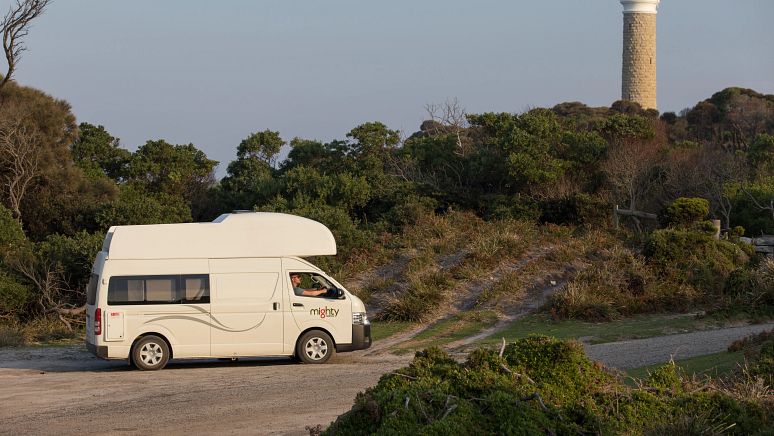 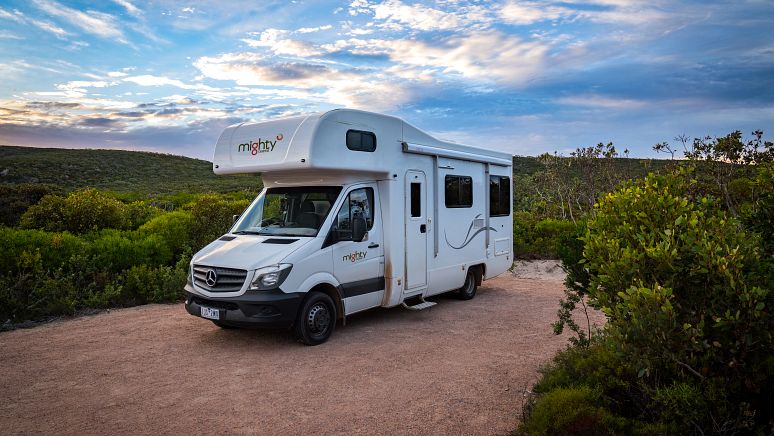 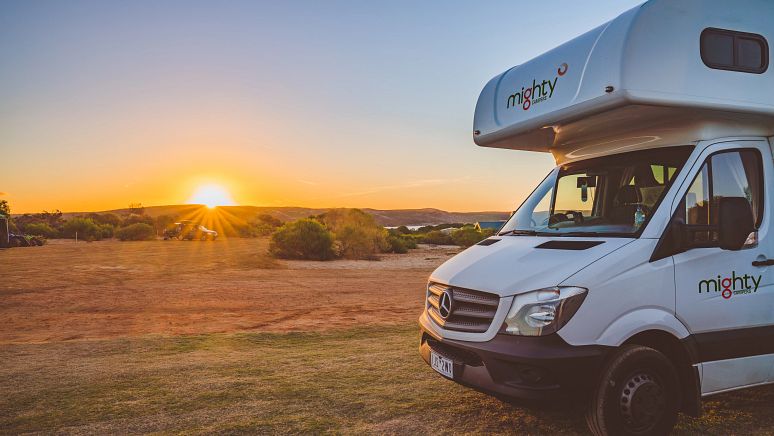 Why Travel With Mighty Campervans

Mighty Australia is perfect for travellers looking for the best value campervan option for their roadtrip. For travellers seeking a free-spirited way to explore the world on a whim, this is a Mighty fine choice. Mighty makes holidays possible for everyone; no matter their budget. From the basics done brilliantly and the total package at a tight price.

We've got your back even if your circumstances change. Check out our booking options and book with confidence.

We have nine centrally located vehicle pick-up branches across Australia.

Your health and wellbeing are our number one priority. Certified as a COVID Clean Practicing Business; have total peace of mind when you collect from our branches.

Help videos, navigation tools, and 24/7 phone support via our thl Roadtrip app will ensure you navigate your camper and the roads like a pro.

Save on Cairns Return Hires

Cruise along the coast from Cairns

If you find the same Mighty campervan type for a lower price elsewhere, we'll beat it!

Get ideas when it comes to exploring Brisbane

Feeling the need for a road trip to beautiful beaches with crystal-clear turquoise water? Wind down the...
Travelling Australia and not sure how to decide your route? Whilst we can guarantee you'll have a great...

Things To Do in Brisbane

The old saying that the best things in life are free is true when you're in Brisbane. If you're looking for things to do on a budget, check out this comprehensive list of options. If you're just wanting the highlights, check out our list below.

The Brisbane area is home to a number of beaches tucked away out of plain sight. Whether you're after a surf beach, a place for your dog or a peaceful spot to enjoy the sun – check out the closest Brisbane beaches here.

Only a 90-minute drive from Brisbane lies one of the most charming stretches of coastline in Australia. A visit to the Sunshine Coast will transport you to a place that is equal parts relaxing and adventurous. Head to Noosa to explore pristine beaches and try one of the epic seaside eateries. An hour south from here, spend a day exploring the Glass House Mountain's craggy cliffs and vistas that seem to go on forever. The Sunshine Coast is also home to an abundance of wildlife and opportunities to encounter animals. Swim with humpback whales in their natural habitats and spend some time exploring Australia Zoo.

If an Aussie outback road trip is what you're after, Birdsville is the spot for you. Explore some of the iconic heritage spots that date back over 100 years ago, before heading west into the Simpson Desert. Visit Big Res, a large red dune that blazes before the sun goes down.

The Gold Coast is an adventure lover's paradise. Packed with an abundance of world-class beaches, amusement parks, and a lively night scene, this city has something for everyone. Hit the surf, experience the thrilling rides at one of the many amusement parks, explore the wild treetops of the hinterland, or unwind at one of many great local restaurants.

Heading to Coastal Queensland, be sure to stop in at Hervey Bay. The seas surrounding this city are some of the best whale-watching waters in the country. Humpback whales stop in the calm waters along their migration route, you can watch these fascinating creatures' playful antics on a cruise. If you're craving more water adventures, hire a boat or jet ski, or go for a scuba dive at the world-class diving site of Wolf Rock.

Surrounding Brisbane is an abundance of natural beauty, completely free to explore. From heritage-listed rainforests to sand islands and bushland, the scenery around Brisbane is so diverse that every day spent exploring will provide you with something new. Whatever you are wanting to find, connect with nature at one of these national or state parks around Brisbane.

Home to lush rainforests, ancient trees, and incredible views, Lamington National Park is an incredible setting for your exploration of Yugambeh country. Discover the Gondwana Rainforests – a World Heritage area. Choose one of the many walks and find the striking Elabana or Chalahn Falls.

Home to an abundance of rare animals and plant species, Mt Barney National Park includes the remains of the ancient Focal Peak Shield Volcano that erupted 24 million years ago. Visitors can discover the changing vegetation at some of the highest peaks in South East Queensland. The trails at this park require a moderate level of fitness.

Located just a 90-minute drive south-west of Brisbane, Moogerah Peaks National Park is home to an interesting landscape of volcano peaks and the incredible lake Moogerah. Visit this spot and enjoy a hike through the forest before spending the night camping at Mount French.

Beautiful Brisbane is the perfect gateway to begin your adventure in Queensland. We recommend spending your first day exploring Brisbane and spending the night there. We know you're itching to get out on the road but it is important to be well-rested when spending days driving for long amounts of time. The sunshine state is packed with camping and caravan parks, making it easy to spend each night of your trip waking up to a different scene of nature's doorstep. For a full list of the best campervan locations in Queensland check out the blog here.

If you are staying at any BIG4 or G'Day Holiday Parks, don't forget that you can get a 10% discount on your stay when you check in with a Mighty camper! Check out our accommodation guide for more information.

We recommend downloading thl Roadtrip app (Powered by Campermate) before you hit the road. The ultimate travel companion; the thl Roadtrip app provides everything you need to help find places to stay and play across Australia, including the closest campgrounds for campervans on your route.

Brisbane's climate is a subtropical bliss, with warm sunshine throughout the year. With an average high temperature of 26 degrees and a low of 16, and more than 300 days of sunshine a year, Brisbane's climate is perfect for exploring the great outdoors. We recommend visiting Brisbane between May and October, this timing avoids the summer humidity and rainfall. Because Brisbane is so sunny all year round, it's important to make sure you always wear a hat, sunscreen, and glasses to stay protected, even on cloudy days.

During summer, average temperatures range from 21-30 degrees and the city has its highest rainfall, which can mean it brings thunderstorms and the occasional flood with it.

Autumn waves the end of the hot summer, average temperatures drop between 15-25 degrees, and the climate becomes less humid with less summer rain.

Winter in Brisbane is generally dry with mild temperatures ranging between 11-21 degrees. Mornings can be crisp but evenings rarely get cooler than 9 degrees.

Spring in Brisbane is similar to Autumn, with average temperatures between 15-25 degrees. Warm sunny days are balanced with cool sea breezes.

Brisbane's subtropical climate offers the perfect setting to immerse yourself in the array of different experiences on offer through Brisbane's events.

Where is the best supermarket for me to stock up on my groceries after I have collected my camper?

We recommend you wait until you have picked up your camper before doing your grocery shopping. That way you will know exactly how much room you have in the fridge and pantry first. Once you have your camper, we suggest you head to the Woolworths DFO, located at 1 Airport Dr, Brisbane Airport QLD 4007. This is the best supermarket to access in a campervan.

We recommend you wait until you have picked up your camper before doing your grocery shopping. That way you will know exactly how much room you have in the fridge and pantry first. Once you have your camper, we suggest you head to the Woolworths DFO, located at 1 Airport Dr, Brisbane Airport QLD 4007. This is the best supermarket to access in a campervan.

What is the closest caravan park to the Brisbane Branch?

26km south of the Brisbane branch

26km south of the Brisbane branch

Can I change the drop off destination during my hire?

What’s included in my campervan rental?

We include everything you need to live and sleep comfortably in your camper. Check out our full list of inclusions here.

We include everything you need to live and sleep comfortably in your camper. Check out our full list of inclusions here.