It may be hard to believe, but for the very first time since setting off on our Mighty Aussie Road Trip 3 weeks earlier, we found ourselves driving through a city. And after 8800km of glorious road under our belts, that says something about the vastness of this beautiful continent.

If you're new to our adventure, great to meet you! We are good friends and film team Saxon & Nicola with our trusty Highball Mighty Camper called 'Rhino', and we're driving from Darwin to Sydney this September. If you haven't read Part 1 and Part 2 our Mighty Australian Road Trip yet, you can catch up here and here. We've been sharing what not to miss (including where to cuddle koalas and spot UFOs!) and it's great to have you along for the ride! If you're already fully in the know, then dive straight into part 3: Welcome to Brisbane.

As we watched Rhinos' reflections drive by in glass shop fronts, gusts of warm wind blew along the urban jungle's skyscraper canyons, through city slickers' hair and suits, making dry leaves and tiny pieces of urban debris dance before us on the streets. After the vast, red, dusty desert of our first leg and the crystal blue ocean of our second, we looked up in wonder at the tall shiny buildings around us and took a deep breath of warm, exciting city air. We were on our third and final leg of the Mighty Aussie Road Trip, and little did we know it would be spent exploring the skies above and air around us.

Brisbane has over the last 5 years become a really cool place to hang out. With international companies making up a big city skyline, the Southbank teaming with exhibitions, concerts, shows and other cultural events (including an open-to-all mid-city sandy beach & lagoon!) the young and hip have moved back after university in Sydney and Melbourne to create a bit of their own hipster vibe in Fortitude Valley. A vibrant backpacker scene means great nightlife for a city that is cosy enough to have a town-like community. There's great (& cheap!) Asian food in Chinatown, and in the evenings and weekends, city slickers get all outdoorsy. You can kayak the Brisbane River and abseil down the cliffs at Kangaroo point – in the middle of the city less than 200m away from your waterfront office. We didn't want to miss the views so booked a beautiful sunset session with Riverlife. 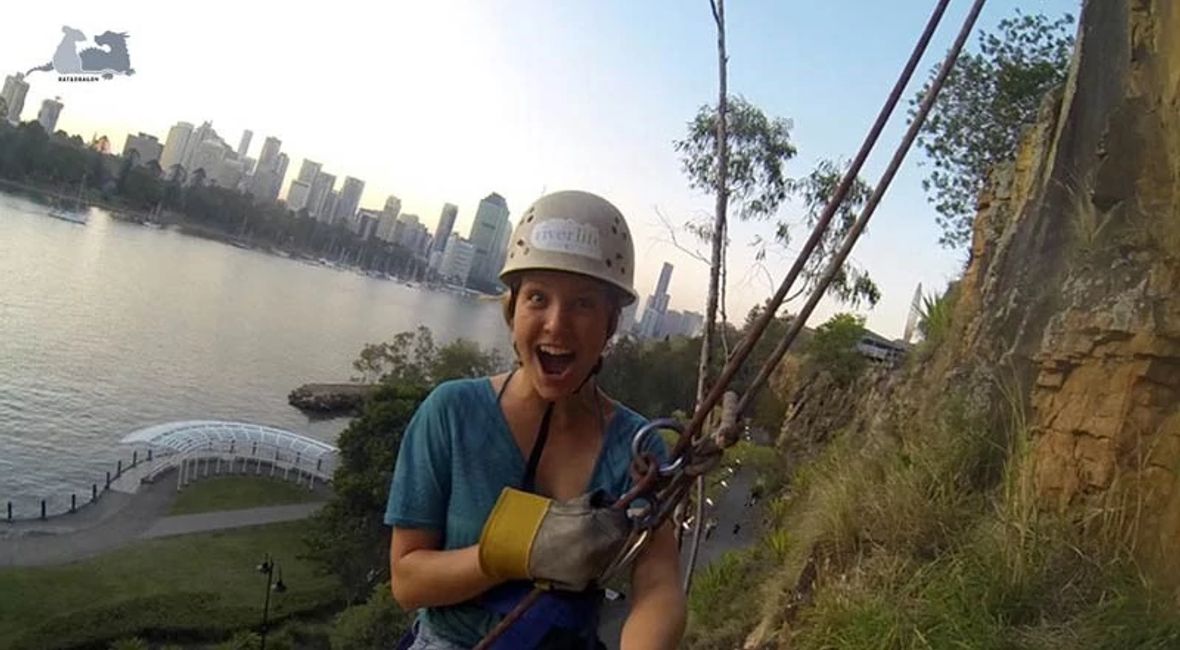 Brisbane is also only an hour by boat from the world's third biggest sand island (with number 2 North Stradbroke Island the same distance from Brisbane and number 1 Fraser Island just up the coast). Since we had skipped Fraser Island in favour of Kroombit Farmstay (which ended up being one of our favourite stops!), we took the ferry over to Moreton Island the following day. As the island is 95% national park, it is very popular for day trips or camping and there is an abundance of activities from snorkelling amongst shipwrecks, fishing, whale watching, 4x4 tours and of course sand boarding. We were greeted by the Tangalooma resort, a rather touristy purpose-built establishment that offers off-road tours, mini-helicopter rides (very cool for 10 mins of awesome views), restaurants and nature talks. Whilst the crowds were a little overwhelming, we didn't have to walk far to leave them behind and enjoy a pristine stretch of white sandy beach all to ourselves.

Tangalooma is also famous for offering wild dolphin feeding sessions, which happen just after sunset. Check out the informative dolphin talk during the afternoon, which explains a lot about the local pod's family structure and animal welfare. Also, don't worry too much if the weather's not great, we got soaking wet anyway and a thunderstorm over Brisbane spectacularly lit up the horizon, which only added to the atmosphere of this incredible encounter. 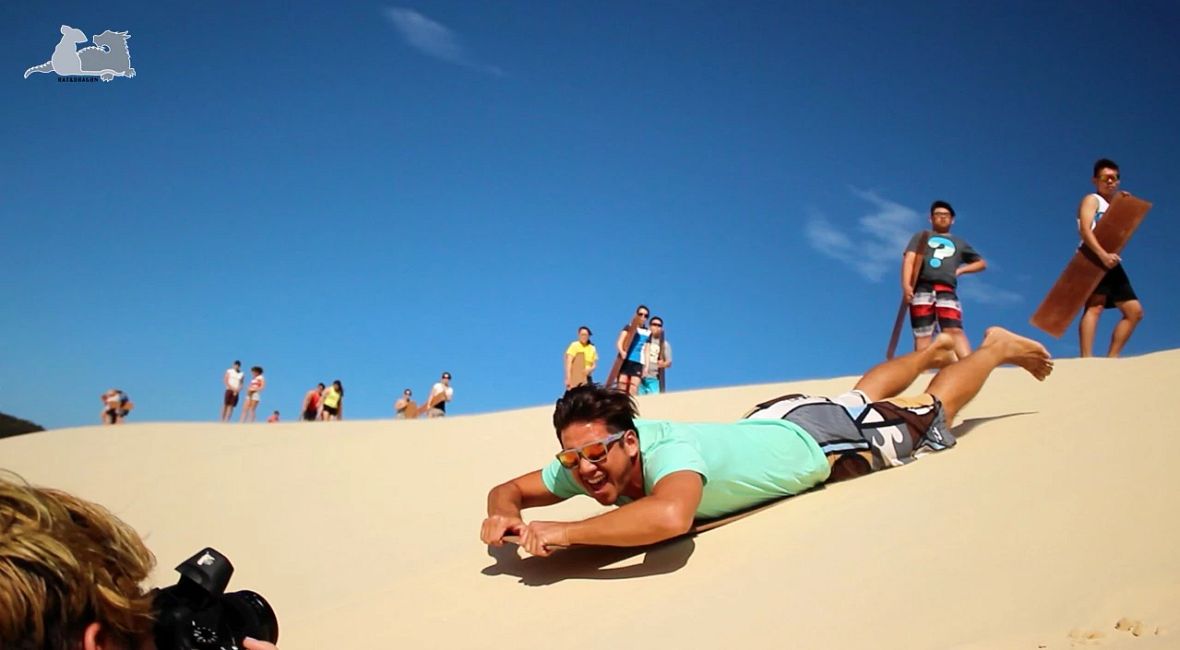 The following day we left Brisbane behind to stop off for lunch at Surfer's Paradise on the Gold Coast. The confusingly named city boasts Miami-style high-rises and beautiful mile long beaches, where the young and beautiful like to be spotted tanning their already fake-tanned cheeks. If you're into Ibiza-style clubbing culture, this is your spot, and if you love watching six packs working out at the beach, the Gold Coast is heaps of fun. We were, however, heading to what some might describe as the polar opposite to the 'Goldie', for nestled about 2 hours further down the New South Wales coastline is what has become a must-go destination for backpackers worldwide.

Village-feel, hippy-vibe, organic, fair-trade, busker-, campervan- and mural-filled Byron Bay is a wonderful place to relax, enjoy great food and vibrant nightlife, as well as surf awesome waves, snorkel beautiful reefs and even spot whales and paragliders from the town's very own lighthouse. You can't camp up there but getting up early one morning is well worth it to enjoy spectacular views of sunrise from the east coast's most eastern point (which technically means you'll also be the first person on the continent to see the sun!).

We could easily have stayed amongst the gently meandering, guitar strumming, fire-twirling multi-coloured masses of Byron Bay and explore the many small alcoves and hidden beauty spots around Lennox Head and Yamba, but about 4 hours drive south via the massive prawn sculpture in Ballina (we told you Aussies have a thing for 'Big Things'!), and a great lunch stop off by the river in Woodburn (the best meat pies in the state) lies a place so mystical, even it's name raises eyebrows in disbelief: "Spot X". It's a real place. Here in Australia. Go on, Google-map it!

Australia is famous for Kangaroos, The Sydney Opera House, BBQs, Kylie Minogue and Surf Culture. We were confident we'd meet Kylie in Sydney (that's where she lives, right?) whilst checking out the Opera House, and had already fed Koalas (with leaves) and ourselves (with steak) in Queensland. To complete our Aussie wish list, Spot X beautifully filled our aspiration of not just looking cool standing on a glorified ironing board on a wave (or in Nic's case, falling off it), but actually living like a surfer for a couple of days.

A small camp site in a national marine park that has been drawing visitors for over 100 years, a huge, empty beach, beginner and intermediate waves (with attached awesome surf school!) and absolute waterfront camping meet with an amazing family of resident backpackers, surf instructors, travellers and parties twice a week. Spot X is run by Mojosurf, which is run by a bunch of Aussie surfer dudes who want to share the lifestyle and prove that surfing is for everyone. Stock up in the brand new Woolworths in nearby Woolgoolga, get the BBQ running in the camp kitchen, have a beer over sunset with new found friends and count as many stars as you can from the beach (or your waterfront campsite) at night.

And if that wasn't cool enough, Spot X also offers short kayaking trips, sea rafting, beach-volleyball, great fishing and its own small festival twice a year. The whole setup is intimate, but that's the point, as Spot X has been described as having one of the most genuine Aussie vibes on the East Coast.

The New South Wales highway system is pretty developed, and there are many places of interest to enjoy along the way. In comparison to averaging 6 hours driving a day on the 1st 2000km-long leg of our Mighty Aussie road trip, distances on the third leg were about half as far, so we had time to take country lanes and get lost between lush green rolling hills. Not only did we stop off at the Big Banana (another 'big thing!') in Coff's Harbour and see some more whales on the way at Port Macquarie, we managed to squeeze in another sand boarding session and quad bike trip on the impressive Port Stephens sand dunes before heading straight past our final destination.

Hang on a minute – straight PAST our finishing point? After 9800km of glorious Aussie road trip from Darwin all the way to Sydney, the dramatic skyline of this legendary city was within arms reach, spread out in front of our windscreen, but due to another invaluable tip from the Mighty crew we kept it at just a tantalising glimpse as we headed inland, on an increasingly winding road through jagged cliff faces and lush eucalyptus forest about another 2 hours west of the city centre to Katoomba, at the heart of the Blue Mountains.

What looks just like a small-ish town on a flat piece of rocky countryside turned out next morning to be a daredevil community perched on the edge of a huge cliff face with staggering views from lookout at Three Sisters. Needless to say, thanks to staying with Rhino 5 minutes away at the Katoomba Falls Caravan Park, we were able to be there earlier than anyone else, so had the view, atmosphere and paths hiking to the Golden Stairs all to ourselves. Feeling the crisp morning air fill our lungs and having the peace and quiet to take in the dramatic gorges and rolling hills was a wonderful way to get ready for the excitement of our final stop that lay ahead.

A short drive back along the same mountain roads, and Sydney was ours. We don't even have to explain how amazing it felt to see the opera house for the first time (there's a great lunch/unofficial picnic spot north of the river at McMahon's Point Wharf), and driving across Sydney Harbour Bridge or along Bondi Beach was like seeing postcards and friend's Facebook photos come alive before your eyes. The Rocks Dreaming Aboriginal Heritage tour runs informative walking tours around the centre of Sydney, the Opera House and Harbour Bridge. Kalkani and the team brought the well-known areas alive with indigenous knowledge, adding a whole new perspective to inner-city environments.

Sydney being a big city, campsites were rather far from the centre, but even the hours drive back north was mitigated by the beautiful setting of what would be our last night with Rhino. The Sydney lakeside holiday park was just that – at the side of a beautiful lake, where kids were playing and someone was washing two stunning thoroughbred horses. No jokes, it was that idyllic. A short walk to the beach gave us time to both contemplate the journey we had just completed and mentally prepare us for the happenings of the next day. For after 10,000km and 4 weeks of driving across a whole continent, we were going to celebrate the Mighty Aussie Road Trip's completion with a bang, by jumping mid-air out of a perfectly functioning airplane.

You may have heard of the adrenaline rush that makes your mind leave your body, your brain dissolve into pure fear and exhilaration and the out-of-this-world views you experience when skydiving. For us, it was the perfect send off after so many amazing things we had seen and done, and people we had met along the road. Hurtling back towards planet earth in freefall and the pure joy of seeing the landscape we had just travelled through from over 14,000 feet in the air spread out below us like an incredibly detailed toy train layout with hills, forests, fields, tiny motorways and cars, houses, lakes, the ocean made us see our whole journey and the world we travel through from an entirely new perspective.

They say road trips are transformative, and after a month on the road with Rhino, we'd agree. Road trips let you write your own story, explore your own deserts, oceans, skies and cities in your own way, and inspire you like very few other holidays can. So here, at our secret picnic spot in the heart of Sydney, we conclude our Mighty Aussie Road Trip. Thanks for coming along for the ride. 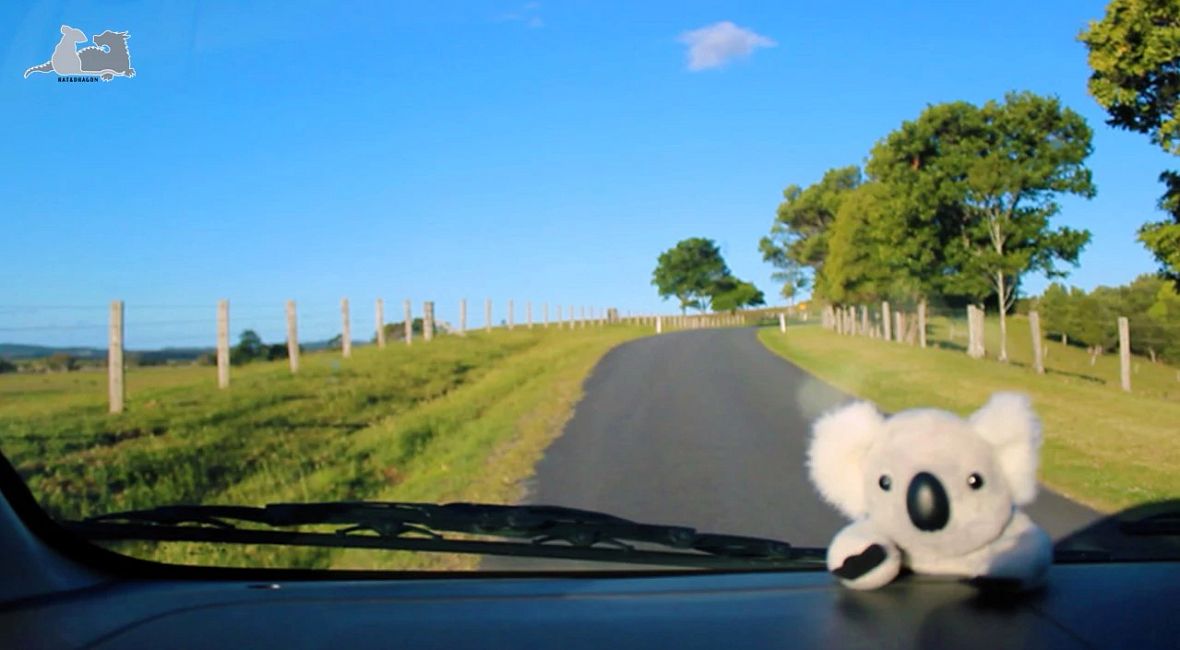