Dust. It was everywhere. Rusty red, warm glowing, adventure promising, Aussie outback dust. Speckled on the side of our trusty campervan, staining our trainers, knees and daypacks, even betraying our not-yet-brushed up light footprints and hand marks on the inside cupboards we kept our photography gear in, after we had quickly wanted to grab our cameras to catch yet another amazing new discovery in this vast continent's red centre. We were on Mars, and we were loving it.

It had been 2 days since we (that's good friends and film team Saxon and Nicola. Hi! Nice to meet you!) set off from the Northern Territory's capital Darwin in late August. What is essentially a large town widely spread out around an international airport, the most northern capital's true blue Aussie culture had hit us square in the face: fully stocked supermarkets, a bustling urban community in the heart of croc-cowboy land, beautiful sunset markets by Mindil Beach and pumping nightlife in pubs and clubs made us feel both exotic and very much at home. We were even lucky to catch the fantastic Darwin Arts Festival and enjoyed meandering around historic Darwin and the lagoon during the day.

Don't think of swimming in the sea though – we soon found out thanks to visiting Crocosaurus Cove, a reptile park right in the centre of town. Huge tanks house all sorts of scaly creatures, from lizards, fish, snakes and turtles to saltwater hatchlings and enormous 5.5m long mega crocs with names like 'Wendell', 'Houdini' and 'Chopper'. For adrenaline junkies, you can get lowered into Chopper's tank during feeding time with only a thin plexiglass box around you, but even the rare chance to have a 360-degree look (including from below!) at a huge saltwater croc was jaw dropping and really made us appreciate the power of these incredible animals.

On a sunny Monday morning we excitedly set off to pick up our Highball Mighty campervan. The Mighty team in Darwin were really helpful, showed us all the handy features and simple needs of our new home for a month and we soon found the 'sharing' shelf in the office where lots of handy things had been left by previous campers. As this was our first ever campervan trip, we took it easy and drove around the block a few times. It was surprisingly simple to navigate our Highball, especially as the industrial estate roads were wide and empty, so we quickly got the hang of driving on the left. We decided to name our camper "Rhino" as he looked big but was pretty nimble, and so we navigated to our first stop of the day: Coles supermarket. We were really happy we'd decided to plan in extra time and get food after picking Rhino up, as we a) knew how much we could fit, b) didn't have to carry anything further than the carpark and c) saved loads of money as we'd already picked up things like olive oil, salt, paper towels and pasta from the sharing shelf at the depot! 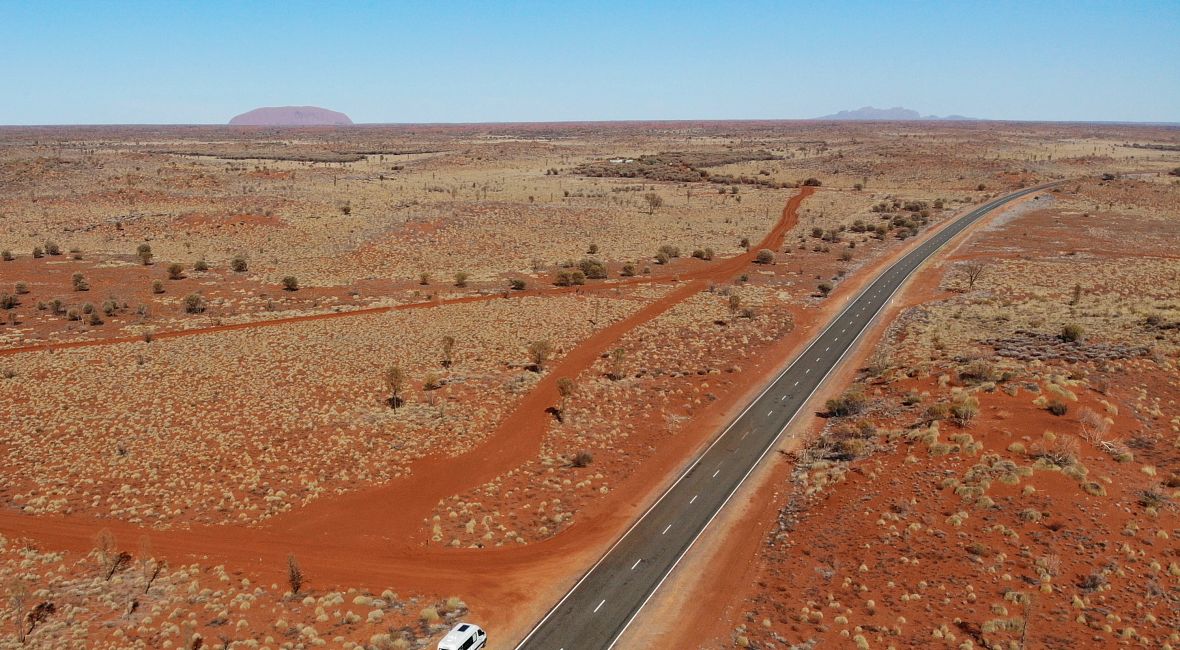 We'd like to say that Coles was our most exciting stop (we think food is pretty awesome), but what lay ahead was truly spectacular. Thanks to a tip from the Darwin Mighty staff, we soon found ourselves about 90 minutes outside Darwin towards the Adelaide River, where Harry, Morgan, Maxine and Karen run wild croc spotting tours. Ever heard of that croc who was caught on camera chomping on a shark? Brutus was right before our eyes and we were in awe. Under strict animal welfare regulations by Parks and Wildlife, Morgan expertly showed us how crocs jump meters high out of the water to catch prey, as well as sharing his vast knowledge of the region and pointing out other wildlife and birds along the way. Talk about meeting the locals! It was incredible. Buzzing with adrenaline we were glad hadn't planned to drive too far our first day, as we still arrived at our first night's camp in Lichfield Park just after sunset. 200km for the first day – and we soon realised from the many kangaroos we would have to get up early to avoid driving at dusk.

Showers. Rhino didn't have one. But it really didn't matter as we woke up to the faint whispering sound of a waterfall through the early morning bird song. This is the great thing about camping in national parks: it's cheap, exciting and you're already in the middle of the action. We went for an early morning swim in the pristine Wangi falls pool (no crocs!) and set off just as the first day-trippers arrived to beat them to the 3 metre tall magnetic termite mounds for our first of many selfie-opportunities. You've got to see them to believe them – it's quite incredible that the millimetre long creatures who run around the few small ventilation openings build these enormous structures all on their own. But we had a long day ahead of us to reach our small and unassuming goal 370km further down the Stewart Highway. The 6-hour drive was broken up by a quick petrol stop in Katherine, and this time, we reached our destination just before sunset.

We were getting used to waking up quite literally at the crack of dawn. As gentle sunlight filtered through our curtains and birdsong filled the crisp morning air, we woke up to find a sign to some rather hidden hot springs. In the outback? Just imagine for a second, a child's drawing of a crystal clear lagoon, in the middle of the Australian red desert, surrounded by pandanus trees, steaming with toasty thermal warmth. This secret dream-pool is Mataranka's Bitter Springs, one of the most gorgeous places we've ever seen - and if you don't believe us, check out the short film we made, as this was one of our favourite stops.

Soaking up the warmth in the gently swirling pool was a great relaxing start to a full on day of driving. We had 700km ahead of us but soon realised we were going to have to add at least 1 hour to all Google map estimates to account for vital petrol (fill up whenever you can - even half a tank!), food (Three Ways Road House has awesome burgers) and toilet stops. Oh, and to see cool stuff along the way of course, like this rather funky plane wreck:

We had good reason to push on, as today we were heading for some massive balls. Karlu Karlu (also known as the Devil's Marbles) is a must-see Northern Territory rock formation and just minutes off the main road. The sunset above the giant round boulders was spectacular and whilst we could have stayed at the adjoining freedom camping spot, Rhino needed some juice and water so we headed to nearby Wycliff Wells Camp Ground, but nothing quite prepared us for what was waiting a short drive down the highway.

Proudly proclaiming to be the UFO Capital of Australia, this camping park boasts full sized statues of aliens, flying saucers, cowboys-meet-intergalactic-traveller-murals and a whole wall of newspaper clippings from the area. We were especially intrigued with a Northern Territory article titled: "Aliens dropped my tractor into a canyon", says Sober Bob.

Another long day's drive would take us to our final destination for this leg of the trip 837km away. We'd been driving a lot, and whilst it would have been great to have an extra day to explore Lichfield, or spread the last two days over three or four and actually relax on a campsite for an afternoon, we found that driving was a big part of the fun. The roads are straight, the horizons are so far away and the distances unimaginable to someone used to driving around Europe bumping into a village every 5 minutes and a town or city every 10 minutes.

The campervans we passed on the way waved to us, and we soon waved back, which made us feel like we were part of a huge family all on the road together. We passed cars dressed up like dogs and found a bearded dragon crossing the road. Thanks to the independence that Rhino came with, we were able to just stop and check him out. Road trains sounded their impressive horns if we waved from the side of the road as they thundered by. The bush fires we saw tear up whole hill sides were spectacular and whilst animals on the road are a real danger (avoid driving at dawn and dusk!), we saw some magnificent birds feed on them and swoop up out of harms way as we carefully drove along the road towards them. Sad at the sight of the squished roos? There's actually some quite cool stuff you can do with roadkill!

We stopped off for lunch just outside Alice Springs at a place called Aileron, where three huge statues of a man, a woman and a child with a goanna made us feel even tinier in this vast landscape. There's a nice 'welcome to Alice Springs' sign we took photos at on a hill just before Alice Springs, but we wanted to reach one of Australia's most iconic places before nightfall, so stocked up quickly in Alice and pressed on. Uluru is at least 6 hours drive from Alice Springs, so we had to make sure we had enough petrol and time to make it. Lookalike Mount Connor tricked us by popping up along the way, but it wasn't until after dark that we arrived at a barrier, that wouldn't allow us to go further. You can't camp at Uluru, just at the nearby purpose built resort, but whilst it's not cheap, it did have everything we needed after our long drive, including instructions on how to get to the right place to see sunrise. 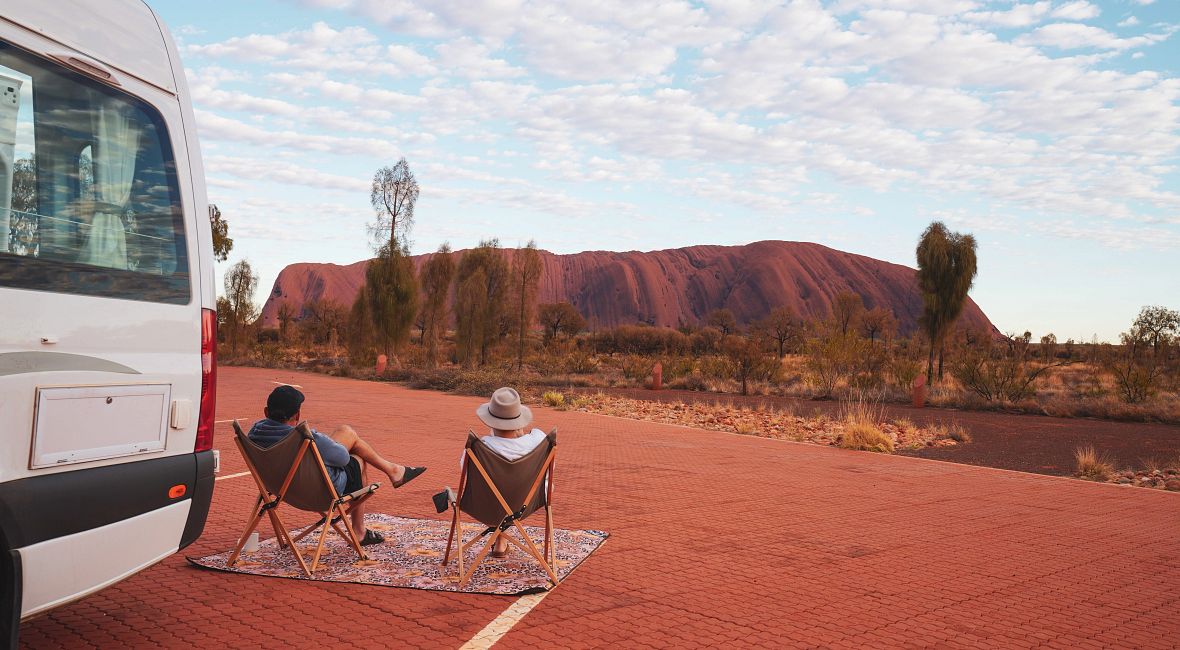 And what an experience it was. It is a cliché that you just have to see certain places in real life to experience how amazing they are, and Uluru (Ayres Rock) is definitely one of them. It looks nothing like a loaf of bread, it's taller than the Eiffel Tower and walking around the whole rock will set you back 9.4km. The magic of this enormous, mythical, colour-changing monolith was in the air as we meandered along a small part of its base during the informative (and free!) Mala walking tour.

All this red dust that we'd been finding in the nooks and crannies of Rhino suddenly made sense as something a lot bigger, more ancient and more powerful than us in our little campervan. Experiences are hard to put into words, and even harder to show on a postcard. As for Australia's Red Centre, you're just going to have to pack your batteries in dust-safe ziplock bags and head over here to live it for yourself.